Clock ticks down on US’ 25% tariff exemption for Chinese tilapia, Alaskan sole, other fish 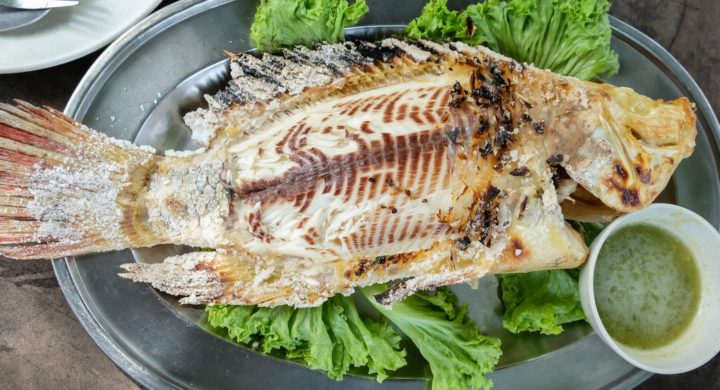 The comment period is closed and there’s little the seafood industry can now do but wait and worry until August 7.

That’s when the exemptions the Donald Trump administration placed on its 25% tariffs for smaller fillets of frozen tilapia, Alaskan sole, snow, Dungeness and red swimming crabmeat and other items from China are scheduled to expire. And, so far, based on multiple seafood industry sources contacted by Undercurrent News, the US Trade Representative (USTR) has made no indication that it’s going to budge.

Jeff Sedacca, CEO of the Sunnyvale Seafood Company, in Union City, California, the US sales division of China’s giant Zhanjiang Guolian Aquatic Products, for one, has little hope that any extensions are coming.

“I don’t think there is any chance they’re extending the exemptions. By not responding to requests for exemption, I think this indicates an implied denial” he told Undercurrent on Wednesday. 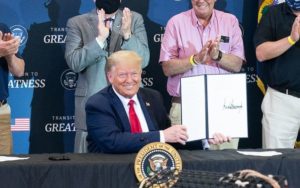 From an official White House photo by Joyce N. Boghosian.

Because it takes four to five weeks to ship frozen tilapia from China to the US, and a few extra weeks on top of that to process and stage orders to ship, Sunnyvale several weeks ago switched from giving its tilapia customers two prices, one with the 25% tariffs included and one without, to giving only the prices with tariffs included.

In all, the change impacts at least 14 products that typically account for more than a combined $500 million worth of US seafood imports from China.

President Trump’s trade war with China, started over a technology-related intellectual property dispute, had its roughly second year anniversary on July 6. It was then, in 2018, you might recall, that the administration used its “section 301” power to have US Customs and Border Protection (CBP) begin seeking tariffs on some 818 imported Chinese products, later referred to as “List 1.”

Between then and May 2019, the USTR has issued three more lists. The first two included a combined $50 billion worth of goods, none of which mattered to the seafood industry, while the third list, released in September 2018, added another $200bn worth of goods, including multiple seafood items, such as tilapia, squid, shrimp, tuna and red swimming crab, along with furniture, luggage and wood products.

A fourth list (known as “4A”) attempts to tariff some $300bn worth of products, including especially agricultural products.

Tariffs on the third list of products that started at 10% were increased to 25% in May 2019, as the US and China have attempted to match each other, tit for tat, with punitive trade measures.

As reported earlier by Undercurrent, the US placed tariffs on $4.9 billion worth of Chinese seafood products between October 2018 and December 2019, collecting some $309.5m worth of fees, based on data provided by the National Oceanic and Atmospheric Administration (NOAA). 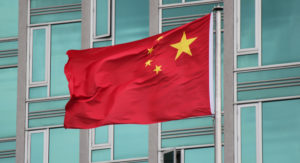 The situation hasn’t improved much for the seafood industry since either, even in spite of the president’s talk in December of a so-called “phase one deal” that promised to, among other things, result in China buying more US seafood and lifting massive tariffs on US-sourced lobster. The Chinese have yet to follow through on the promise and have been heard suggesting more recently that they won’t budge on lobster tariffs.

One of the few mercies the seafood industry has received during the trade war was the administration’s decision, in August 2019, to leave cod and salmon sent to China from Alaska for processing off the fourth list of goods to be tariffed.

Also, USTR showed it was willing to grant some exemptions to the tariffs for multiple items, announcing relief for haddock, Alaskan sole and flounder fillets in December 2019, Alaskan plaice and several Alaskan crab meats in February 2020, and then tilapia and red swimming crab in March 2020. 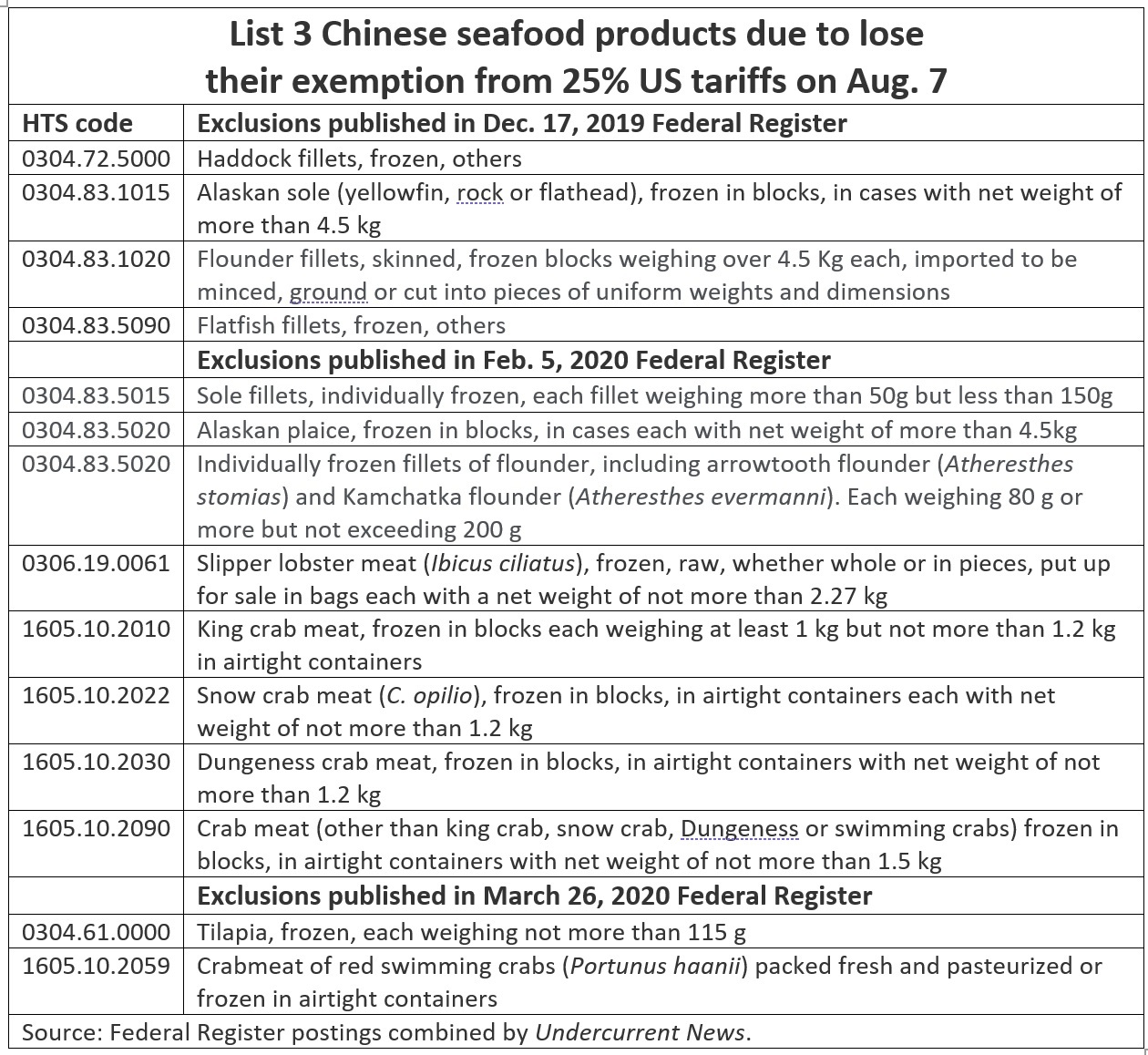 Two of the Chinese seafood items that have perhaps most enjoyed a brief reprieve from US’ 25%  tariffs are small-sized Chinese frozen tilapia fillets, “each weighing not more than 115 grams,” or 4.05 ounces, and red swimming crabmeat (Portunas haanii), “packed fresh and pasteurized or frozen in airtight containers.” USTR granted them an exemption on March 26 along with 175 other nonseafood products on its third list.

Similar exemptions were also granted for imports of Alaskan sole (yellowfin, rock and flathead), Alaskan plaice, as well as king and snow crabmeat among 12 total seafood items back on Dec. 17 and Feb. 5.

However, the exemptions for all of the above items expires on Aug. 7, a date which was included in the exemption notices when they were published in the Federal Register. It corresponds with the two-year anniversary of USTR’s earlier publication of an extension of a comment period on raising tariffs on list three from 10% to 25%.

USTR received as many as 1,900 requests for extensions in relation to the exemptions of tariffs on its third list of Chinese goods before the comment period ended on July 7, more than a dozen of which were submitted on behalf of the seafood industry, Undercurrent found when it reviewed the database. Companies and organizations asking for extensions for tilapia included Sunnyvale, Slade Gorton, the Fishin’ Company, High Liner Foods (USA) and Dagim Tahorim, a New York City-based wholesaler, for example. 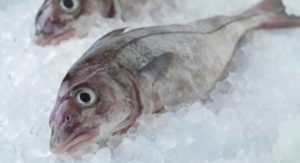 Haddock on ice. Photograph by Picture Partners on Shutterstock.

The Groundfish Forum, a trade association comprised of five member companies that operate 19 trawl catcher-processor vessels in waters off the Alaska coast, Polar Bay Foods, a Bellevue, Washington-based company that regularly exports Alaska-sourced halibut, flounder, pollock and salmon to China for processing, and the Conrad Sales Group, a wholesaler and importer based in Greensboro, North Carolina, were among those seeking the extension of tariff exemptions for frozen Alaskan sole and plaice.

Haddock “does not originate in China and is of no strategic importance to the ‘Made in China 2025’ initiative”, High Liner said, referring to a Chinese initiative aimed at producing high quality products and reducing that country’s independence on foreign suppliers. “The hand-cut portions used in our value-added frozen finished products are not available from sources in the US in commercially viable quantities, nor is it a valuable utilization of the relatively small quantity of haddock caught by US fishermen, which can command a much higher price in the fresh fillet market.”

“The United States is only capable of producing roughly 10-15% of the quantities needed for the [US] swimming crabmeat [market],” Supreme Crab wrote. 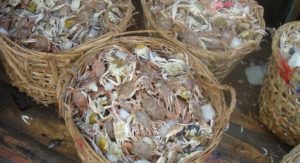 As of Friday morning, the USTR had yet to publish a single approval of a list three exemption extension in the Federal Register.  However, on Tuesday (July 28), the agency announced that it was extending 25% tariff exemptions for 14 specific Chinese products included on its second list of items, Global Trade Magazine reported.

None of the items granted exemption extensions were seafood-related, but rather included a collection of health care machine and motor vehicle parts that were due to have their exemptions expire on July 31.

Why certain items are granted tariff exemptions or exclusions, while others are not, remains a mystery to many.

“There’s no insight into how or why USTR is making decisions on exclusions. It goes into a black box and there’s no rhyme or reason that anyone can figure out into how the decisions are being made,” Jonathan Gold, vice president of supply chain and customs policy for the National Retail Federation, is quoted by the WSJ as saying.

Tilapia is one of the Chinese seafood items most commonly imported by the US and was previously one of the most tariffed.

USTR’s exemption for the tariff on tilapia, which was requested by Dagim Tahorim, a New York City-based seafood processor specializing in kosher products, was limited to smaller fillets, in the 2- to 3-ounce sizes, but more often fillets are bought in 3- to 5-ounce sizes and don’t qualify. Similarly, the exemption has not applied to tilapia sold in large frozen blocks for restaurants. 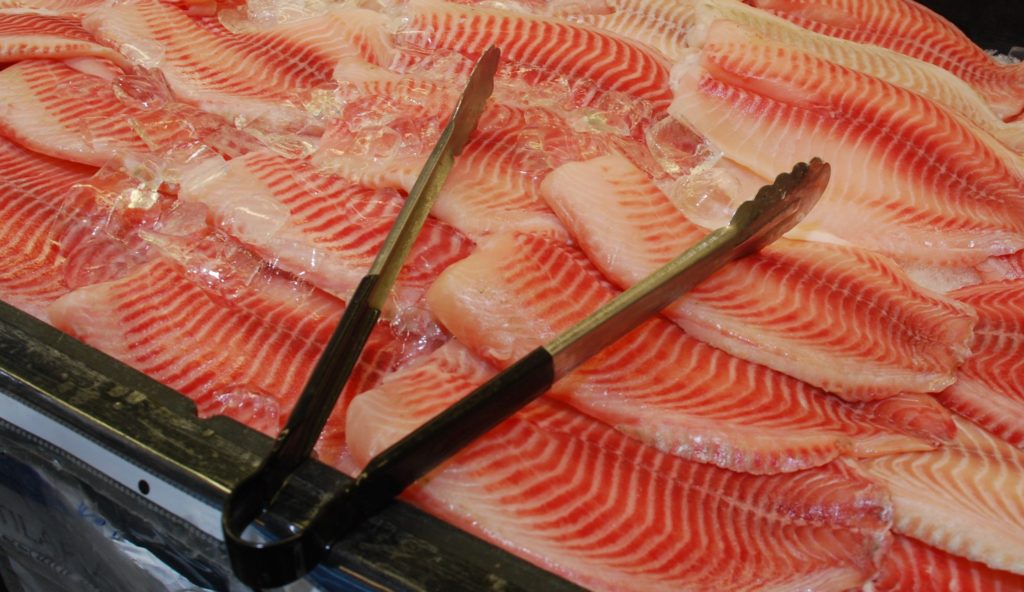 Also, on the seemingly positive side, the exemption was granted retroactively, going all the way back to Sept. 24, 2018, when the initial 10% tariffs were placed, giving importers the green light to recover some of their fees.

However, CBP has declined to provide such refunds to companies for 3-5 ounce tilapia fillets under the 115 grams or less standard, pointing to the mixture of sizes in shipping packages and containers, one importer told Undercurrent.

Unless a company can prove — months after its product was sold and consumed — that its entire shipment was made up of tilapia sized 115 grams or less, “every individual fillet”, CBP won’t honor the reimbursement request, the importer said.

In fact, CBP is proud of the way it has policed the limitations of tariff exclusions. In a press release issued on July 21, it boasted how CBP import specialists have “reeled in $7.6m since May in duties from 676 shipments of imported tilapia”, crediting an operation launched on May 12 that it calls “Just Keep Swimming”.

Regardless of the tariffs, tilapia imports have continued at a strong pace in 2020, based on a more recent review of NOAA data by Undercurrent. Between January and May 2020, the US imported 48,895t of tilapia worth $126.5m, that’s up 21% over the volume and 1% over the value imported during the same five months in 2019.

And Sedacca believes a strong pace of Chinese tilapia imports will continue after Aug. 7, even if the 25% tariffs return, though his company and others will be forced to absorb the extra cost.

But Abe Stefansky, the seafood purchasing officer at Dagim Tahorim responsible for seeking the exemption for frozen tilapia, said the return of the tariff couldn’t come at a worse time for consumers. 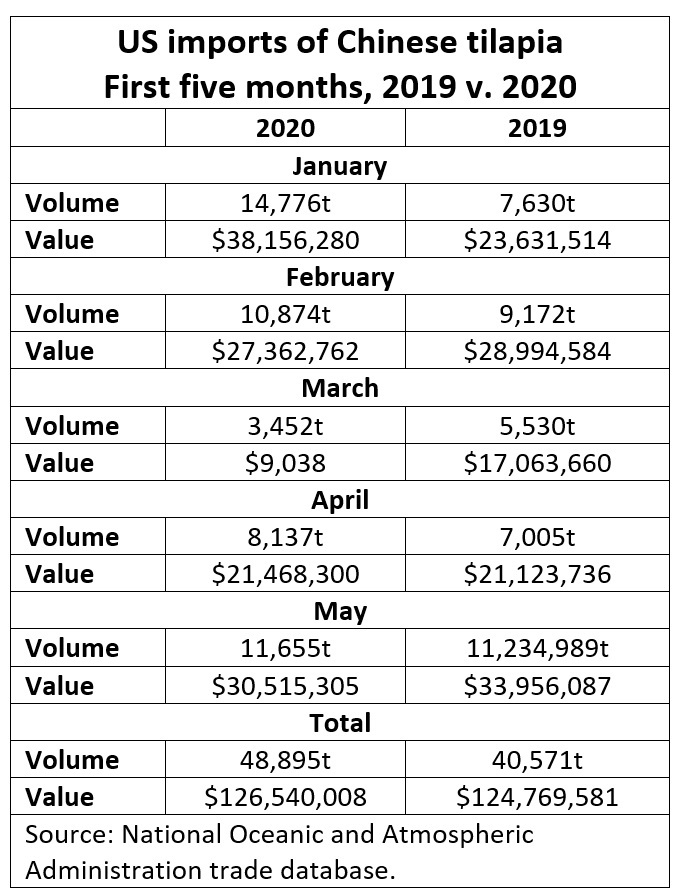 “It’s very hard for people in this economy, especially those with large families to feed,” he said. “We want people to eat healthy, and fish is a very healthy food. But you’re talking about asking them to spend 25% more for it and they can’t afford that.”

Not everyone who submitted a comment letter to USTR, however, wants to see frozen Chinese tilapia be protected from the extra 25% tariff. A comment submitted by the At-sea Processors Association and Pacific Seafood Processors Association, two groups that represent harvesters in Alaska and the West coast of the US, let it be known that they were opposed to the extension.

“Tilapia is a generic whitefish product for which a vast array of substitutes are available from non-Chinese sources, including US sources,” the two groups wrote. “This exclusion causes economic harm to the US seafood harvesting and processing industry because Chinese tilapia competes directly in the domestic market with wild Alaska pollock and other US whitefish.”