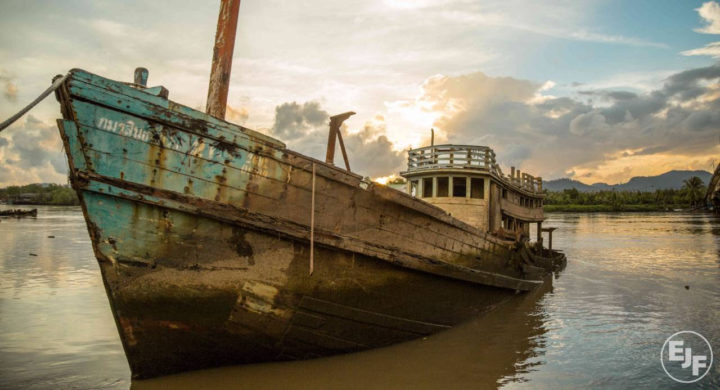 The Seafood Working Group (SWG), a watchdog group representing 18 non-governmental organizations (NGO) that has been repeatedly critical of Thailand’s handling of labor, on Friday called again for the Donald Trump administration to lower the country’s ranking on the US State Department’s Trafficking in Persons (TIP) Report.

The 2020 TIP report, released in June, preserved Thailand’s ranking at “tier two”, despite “detailed and comprehensive evidence demonstrating the weaknesses of the Thai government’s efforts in the areas of prosecution, protection and prevention of human trafficking in 2019”, SWG said.

SWG, which includes Greenpeace, Fishwise and Human Rights at Sea in its coalition, has argued to have the Southeast Asia nation downgraded to the tier two “watch list” since “it does not fully meet the minimum standards set forth in the US Trafficking Victims Protection Act (TVPA) of 2000 and did not make sufficient progress to address trafficking in persons in 2019”.

SWG said it did its own report, which relied on consultations with frontline worker organizations, and documented 23 potential labor trafficking cases, although it noted that even the evidence presented by State in its TIP report was “much more in line with the criteria for the tier two watch list ranking”.

The TIP report is the US government’s principal diplomatic tool for engagement with foreign governments on human trafficking and is released each year, ranking countries across four tiers based on their anti-trafficking efforts. The lowest ranking, tier three, triggers possible aid sanctions; tier two does not lead to such consequences.

The 2020 TIP report highlighted five areas where the government of Thailand demonstrated increasing efforts compared to the previous year. However, SWG feels the TIP report also provided clear evidence that four of these efforts have been “weak and ineffective”.

Firstly, the State Department noted serious limitations in the impact of anti-trafficking training to judges, and the work carried out with NGOs to provide trauma-informed
care training to police, prosecutors, and shelter staff, SWG observed.

“The act of conducting trainings alone, without assessing their impact, should not be considered an ‘increasing effort’ to combat trafficking,” the group said. It also said training was largely provided with significant support from UN agencies, NGOs, and other governments; efforts that are largely funded and provided by external entities should not be used to determine tier rankings, it said.

“In any case, 76 cases reflects an extremely low number of labor trafficking investigations in the context of the millions of labor migrants in the Thai economy with known vulnerabilities to trafficking.”

Only four labor trafficking cases were in the fishing sector, which SWG finds to be extremely low. “The ILO Ship to Shore Rights’ study conducted in 2019 showed that 14% of fishers interviewed were in a situation of forced labor.”

Thirdly, while compensation to victims through the anti-trafficking fund rose year-on-year, the impact fell short of supporting reintegration for survivors, said SWG. The Thai government provided THB 11.88 million ($398,990) to trafficking victims from its anti-trafficking fund, including THB 1.68m to victims residing outside government shelters, in 2019. This represented an increase from the THB 6.15m provided in 2018.

Fourthly, the TIP report noted successful restitution payments to victims of trafficking, paid by traffickers, for the first time.

“The government did not report how many restitution claims prosecutors filed on behalf of victims in 2019 (116 in 2018) but reported that courts ordered THB 3.3m in restitution for 14 victims in two cases in 2019.”

However, the TIP report itself said the execution of court orders to pay restitution for victims remained ineffective, particularly for non-Thai victims.

More broadly, SWG claimed Thailand did not warrant the tier two ranking in 2020 because it has “demonstrably failed to prevent human trafficking of migrant workers”.

As it submitted to the US government, there are several structural issues underpinning
the risk of forced labor and human trafficking that remain to be addressed, it said.

“First, the government’s system for registering migrant workers in Thailand is insufficient and ineffective, and often leaves migrants without protection under labor laws. Second, the Thai government has failed to effectively prohibit recruitment fees and related costs, which violates the International Labour Organization [ILO]’s general principles and operational guidelines for fair recruitment and forces migrants to routinely go into debt to brokers, recruitment agencies and employers.”

Third, the government has failed to remove significant barriers to changing employers, said SWG; the current policy affords workers with the limited opportunity to change employers under certain conditions but, in practice, it has been nearly impossible for migrant workers to use these provisions even when laboring under abusive
conditions, it wrote.

“These factors — lack of labor protection, debt, and inability to change employers — are
built into the legal framework, represent indicators of involuntariness and coercion, and are strong risk factors for forced labor and human trafficking.”

The Thai government has failed to ratify core ILO Labor Conventions 87 (Freedom of Association) and 98 (Right to Organize and Collectively Bargain) or to revise its labor legislation to ensure that these fundamental, internationally-recognized worker rights are respected. As such, Thai law explicitly bans non-Thai citizens from the right to form trade unions or play leading roles in them, SWG observed.

SWG further noted that Taiwan remained at tier one in 2020 despite a “significant body of evidence documenting systemic labor trafficking in Taiwan’s fishing industry and the government’s failure to make serious and sustained efforts to eliminate it”.